> His son Kirei Kotomine was born on the 28th December 1967 and thanks to his pious worship, Kirei was gifted with Magic Circuits from the divine sacrament.

Kirei was born with Magic Circuits despite having a non-magus lineage.
He is not very skilled as a magus (что НЕ эквивалентно "он вообще не маг"), and he cannot reach the "first-rate" level no matter his efforts. He studied alchemy, spiritual evocation, summoning, divination, and spiritual healing under Tokiomi (какой смысл был бы в этом, ради литературы?), but his tutelage of magecraft never progressed beyond the degree of a beginner. The only one he was skilled at was spiritual healing, being more skilled than even his master after three years of training. During battle, his most adept skill is physical enhancement to exert greater physical strength.
Тут с натяжкой можно предположить, что это позволяет ему на равных драться с Кирицугу. И это не тренировка, которая у какого-нибудь там обычного мастера кунгфу, а уже сила не нормального человека.

Kirei is a Spiritual doctor (霊媒医師, Reibai ishi?) that heals through a spiritual medium, as in healing through the soul rather than the flesh. It is a "curse" that can remove the infected part without using a single surgical knife on the body. While he has practiced many different types of magecraft, healing is the only one that fit him because his magical aptitude is specialized in "opening wounds."

Uro: What I imagine is that for the Saber Lily storyline, in Fate/stay night, Saber was completely beaten by Caster, and so she became one of her Servants. Like, she thought "I'd be way better off with Caster than with Shirou." (Laughs)
Nasu: I never thought of that. Interesting. So in other words, the white dress represents how both her body and soul have been tamed by Caster. So Lily is truly like a "lily" to Caster... you crazy bastard, you did it again...
Takeuchi: Lily's design was inspired by the dress she wore when Saber was captured by Caster. Then, we just filled it with feminine qualities that Saber lacked and it became what it is now. So basically, I think Urobuchi really hit it close to the mark.
Uro: Really?! Lily looked like a villain to me from the moment I saw her. Imagine her appearing from behind Caster, really working those heels! Just thinking of it gets me excited!
Takeuchi: But in terms of villains, don't we already have Alter?
Uro: No, she isn't a villain, she's a dark hero.
Nasu: Alter is an idealist who clings to her own values even though she's been blackened. In that respect, she isn't a pure villain.
Uro: For example, Alter's like how Hakaider was in Mechanical Violator Hakaider (*8). And Lily is the enemy she would face. The wrinkles in the corners of her eyes are proof to that. She'd shine as a villain.
Nasu: Then after defeating Lily in battle, Alter would jump on a motorbike in the last scene and ride off into the sunset. Then the narration would come in: "She is a modern knight, who lives in a world of darkness!" (*9)
Takeuchi: Motorbikes aside, (laughs) I do think it'd be interesting to add meat to Lily's character in that manner. 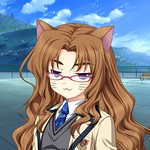 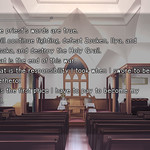 Why Caster's phantasm work on Berserker, even if it C-rank? Because it brake the rule.

The best scene so far. 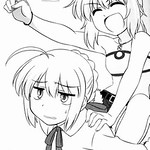