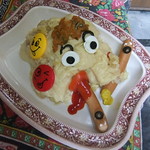 Eastern-Slavic cuisines have a long tradition of pancake cooking and include a large variety of pancake types. In Belarus, Russia and Ukraine, pancakes may be breakfast food, appetizer, main course, or even dessert.

Blini (Russian: блины), Mlynci (Ukrainian: млинцi) are thin pancakes, however somewhat thicker than crêpes, made from wheat or buckwheat flour, butter, eggs, and milk, with yeast added to the batter. Blini/Mlynci cooking dates back to pagan traditions and feasts, which are reflected in today's "pancake week" celebrated in the winter before the Great Lent. In pre-Christian times, blini/mlynci were symbolically considered by early Slavic peoples as a symbol of the sun, due to their round form.[23]

Blintzes (Russian: блинчики blinchiki) are thin crêpes made without yeast. Filled blintzes are also referred to as nalysnyky (Ukrainian: налисники), nalistniki (Russian: налистники) or nalesniki (Russian: налесники).[24] A filling such as jam, fruits, quark, or cottage cheese, potato, cooked ground meat or chicken, and even chopped mushrooms, bean sprouts, cabbage, and onions, is rolled or enveloped into a pre-fried blintz and then the blintz is lightly re-fried, sautéed, or baked.